A fellow high school classmate of mine started a thread on Facebook about funny high school memories.  She included about twenty people in the message.  Everyone replied with these water balloon stories, or prom stories, or some other rated “G” story that just wasn’t in my memory of high school.  I decided to spice things up a bit with the following.
Another student and I were looking through the high school negative dryer for something to print...It didn't have to be ours, or any good...we were just looking for an excuse to spend all period in the darkroom.  So, I spotted this roll of negs with what look to me as nude photographs.  We took them to my enlarger, and started printing them. Sure enough, it was a roll of nudes.  Poorly exposed, and processed, not to mention very unimaginative composition...I'm not going into detail.
We continued printing...well...because we were teenaged boys...at the end of the day we had, like 15 8x10s from this roll.  We didn't recognize the model or have any idea how a roll of nudes got into the dryer.
I had a stack of about 25 bulk film containers behind my enlarger, so I hid the negs in the sixth one from the bottom.  My buddy hid the prints in the locker next to his because he thought the girl was absent.
So...the girl wasn't absent, she found the prints, and threw them in the trash. The custodian found them and took them to the principal.  Because they were on photographic paper, he took them to the photography teacher, who immediately searched my enlarger room.  The teacher spent the next day printing them.  He called me at home about 1:00 PM and said I needed to meet him in the principal’s office.  I told him I was sick. He said they found the roll of negs.
I asked, “What negs?”, and he yelled, "The NUDE NEGATIVES!"
I told him I'd be right there. So I called a friend, who I knew was also skipping...and he drove me in.
I walked into the office, and the principal was leaning back in his chair looking angry.
The photography teacher walked up to me and said, "Mr. Whitmire, you shouldn't be doing this kind of photography, and YOU CAN'T do it at school.  Do you realize we could expel you for this?"
I said, "They're not my negatives.  We found them in the dryer and we printed them to find out who took them, so we could tell them that they are nuts for bringing them to school."
"We know that you are the only one to have the contacts to do this kind of photography."  He said.
I rolled my eyes and said, "Thank you for your confidence in my connections, but if I had them, these aren't the photographs I would take.  And I would use the studio darkroom because they have thermometers, and better chemistry.  If I had taken them, don't you honestly think they would have been properly processed?"
My dad walked in. 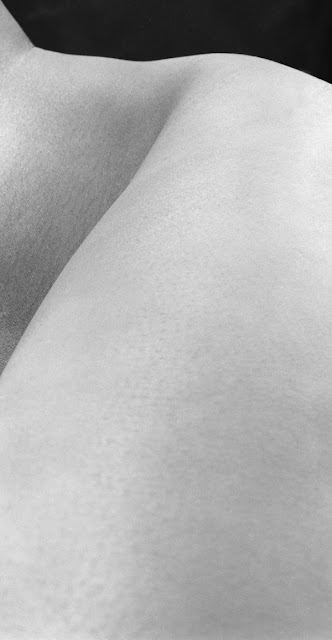 I muttered under my breath, “Oh f@#k.” Only, it wasn’t totally under my breath.  The principal heard me and perked up.
"Mr. Whitmire, we've found a roll of nudes in your son's possession, and we think he took them." The teacher said.
My dad didn't skip a beat.  "Well, are they good?"
The principal started laughing.   The photography teacher didn't even understand the question.  How could they be good?  They were of a naked lady!
Actually they were not good, and I said so, “No, Dad they’re horrible.”
I was kicked out of the darkroom for a quarter...and my grade went up, as I was using the thermometers in the studio darkroom.
I was inspired.  I thought, if I ever do take any nudes, they won’t be what the photography teacher expected of me.  I had seen all of the nudes in the Professional Photographers of Washington print competition, and that inspired me too.  There were nudes in barnes, and nudes in forests, and nudes in deserts, and nudes sitting on wicker chairs in high key backgrounds, etc.  I thought these things just wouldn’t happen...Inspiring.  I thought, if I do make any images of nudes, they will be, first of all, different, and second of all, plausible.  This is my first nude, it's titled, "Nude Dune".