I used to be an F5 totin’, film speed pushin’, rock & roll photographer. My clients were Guitar World, and Guitar Player Magazines, artists websites, record companies, and I spent two years photographing concerts for RollingStone.com. That was 17 years ago.

Actually, I think I did my last concert 12 years ago, when I photographed the Sasquatch Music Festival at the Gorge in 2006. That was a riot. I was working as a staff photographer for a magazine that folded after the first issue, and consulting for the firm that handled the press. That wasn’t the riot part. The weather was. It hailed hard for over an hour. A half an inch of water in my camera bag later, I had ten rolls of moist 800 ISO Fuji press film to process, and two rolls that I knew were thrashed. But my F5 and all of my lenses dried out without issue. That camera was built like a tank.

I digress. What I’m writing this about is last October, I got my Nikon D850. See, I’ve been doing gallery stuff for the past few years, and I really wanted a camera with all the promises Nikon made about the D850. I got it and it is a beast! It’s built like the F5, not like the D600 that I had. In fact, I would put it in the same bag as my F5 in a hail storm with the half inch of water. And I wouldn’t have lost any images, as SD cards can get wet.

But that isn’t why I got it. Enlarging macro photographs of calla lilies and photography of the Milky Way to 20x30 and 30x40 and even 40x60 is why I got that camera. It delivers full frame 45.4 megapixel photographs. 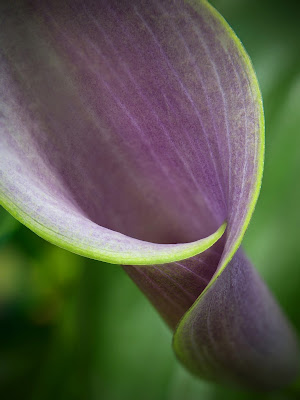 I set up a tent with a big translucent on top, and a smaller one on the side. My first Calla Lili plant of the year was the subject.

I tried out the automatic focus stacking mode of my new camera. At ISO 64, and f/11, I think the shutter speed was four seconds. I focused on the tilting touchscreen that reminded me of a view camera ground glass, all zoomed in to the pixel like a loupe to make sure everything was as sharp as it could possibly be. I pushed start on the touchscreen, and watched it go! It was programmed to make 30 exposures silently, electronically, with no moving shutter. It can handle up to a couple hundred exposures in the focus stacking mode. The lens adjusted focus just a little bit for each exposure.

Then I put the images in Lightroom, and stacked them in Photoshop. That was an adventure. Photoshop made a few errors. But it was really fun painting focus!

I decided early on, that in order to be completely comfortable with this camera, I needed to test its capabilities. I needed to learn how exactly to use its tools to achieve what ever pre-visualizations I had in my head. And how the capabilities of the software I was using could modify the images more closely to what I imagined in my head.

I needed to see how well an image could be resized up to 40x60 made at an ISO of 25,600. I took a random, handheld photographs of my dog under light from the TV. When I looked at it at 100% it looked really noisy like the grain of TMax 3200 film pushed a stop. Next, I put it through NIK DFine 2 noise reduction. Just standard, no adjustments. That was the magic trick. Most of the noise seemed to 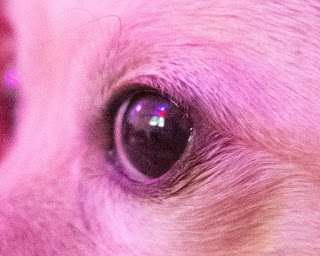 disappear. Then I resized it with On1 Resize 10. The results were fantastic, grainy and high contrast, but understandably so. The whole image was awful, but a whole lot less awful than I expected. It had the look of TMax 3200 exposed at ISO 800. It had that look, but only at 100%.  See, and that’s the thing about the D850, it’s got the resolution of literally two cameras, 45.4MP.

So, when my step daughter called me and said she volunteered me to photograph a high school play, I jumped at the chance. I set the camera at an ISO of 10,000. The photographs reminded me of the ISO 800 Fuji Press film....when I looked at them at 100%. When put through Nik DFine 2, it looked much better.

Everything works that much better together. What I mean by that is, at 100% magnification, noise reduction looks a little like a watercolor filter. And by bringing in more pixels, the watercolor effect is smaller in size, and less apparent, but the noise is still taken out. And the resizing works very well.

What you’ve got here is a camera with 7 frames a second up to, like, 24 exposures before it starts to slow down....think about that. A Hasselblad that has the capability to burn through a full roll of 220 film in three and a half seconds.

Now that would freak out my father. He would say, “Why???” I would go through my normal bouncing ball, peak of gravity, and guitarist’s windmill chord argument for multiple exposures in a second, but then I would go into, “Say you’re making a family portrait of 10 people and two dogs. Three of the people are under 4 years old, and one baby. You have set up an outdoor portrait out in their farm backlit by sunset. You have about 30 seconds with which to work.” He would agree he’d been in that situation many times, and this would get him thinking.

So, the camera is very sturdy and well built, with near medium format resolution over every ISO from 64 to 25,600, a focus stacking mode, a 180° tilt-able 3.2 inch touch screen, 7fps that doesn’t slow for 24 frames, and I haven't even put it in video mode yet.
Posted by Brent Whitmire at 4:13 PM No comments: